So, I have to confess that I have a bit of a fixation with searching the for sale ads on Kijij and Facebook. You never know what you are going to find! But, if you don’t obsessively check, you might miss something good! I have also been selling a whole bunch of  stuff that I have been meaning to bring to the donation box… I think sometimes I forget that the stuff that we don’t need or use anymore still has value. I guess it works in reverse too… Someone else’s trash is my treasure!

Anyways, back to my story… A couple weeks ago, I found this pair of chairs on Kijiji for a great price… A great treasure!

They had a few dents and scratches, but the price was right, so I bought them to refinish them. I had been looking for a couple chairs for a homework desk I want to build for the kids in the family room (sorry, you will have to wait for the tutorial for that one) and I thought these would match the chairs we already had.

Step one is to remove the trim. I learned that these chairs have been recovered before, and the trim was glued on with a glue gun, but it came off fairly easily…

Tht fabric ripped a little as I was pulling the trim off, which revealed the second layer of fabric…

Here are some of the essential tools. Soon after I started, I also added a more sturdy pair of needle nosed pliers, and a thin flat head screwdriver. 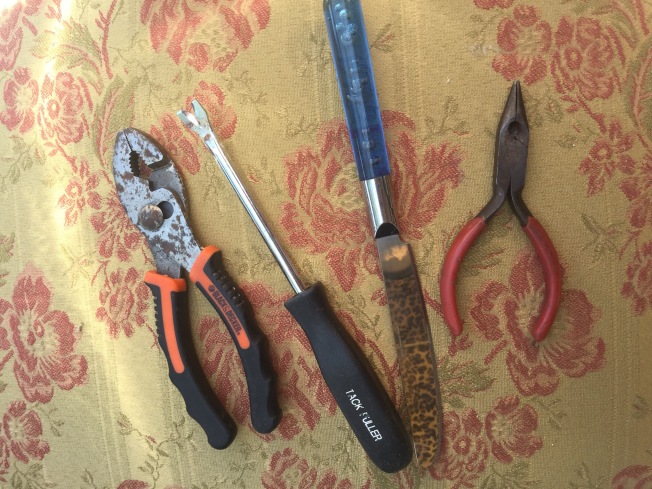 Man, were there a lot of staples!!

I forgot to take a picture of the back of the chair as I was ripping it apart, but below is a photo of another chair, so you get the idea. What I didn’t realize before I pulled these chairs apart was that there is no actual wood or back to the chair…there are two layers of fabric, and a layer of foam stapled to the frame. 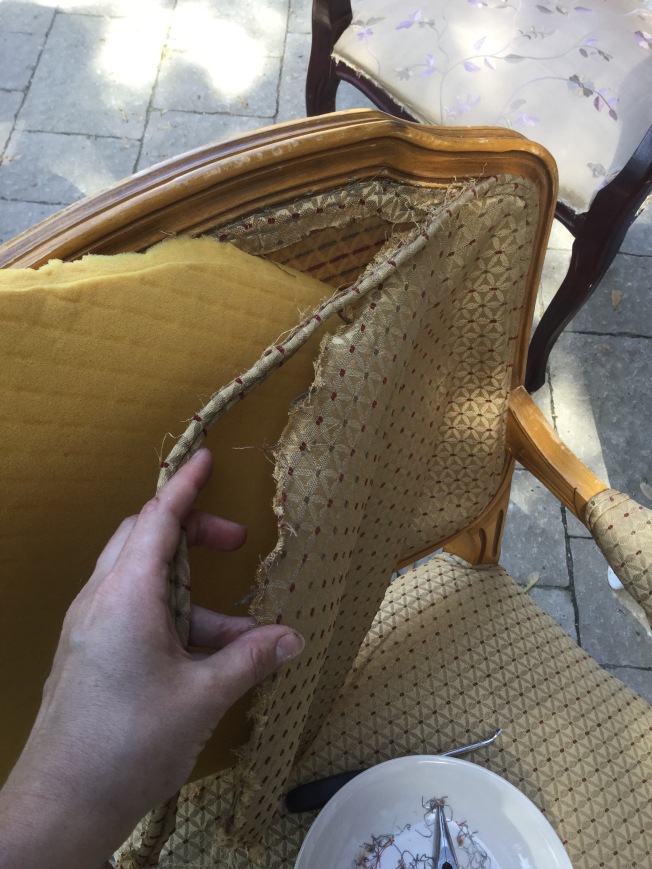 So, as I mentioned before…so….many…staples…as I was trying to pry them out, the fabric was just ripping apart. So I spent a couple hours pulling out staples (and my wonderful husband stepped in to do a bit of pulling too…) my hands were aching by the end of the day! Lol 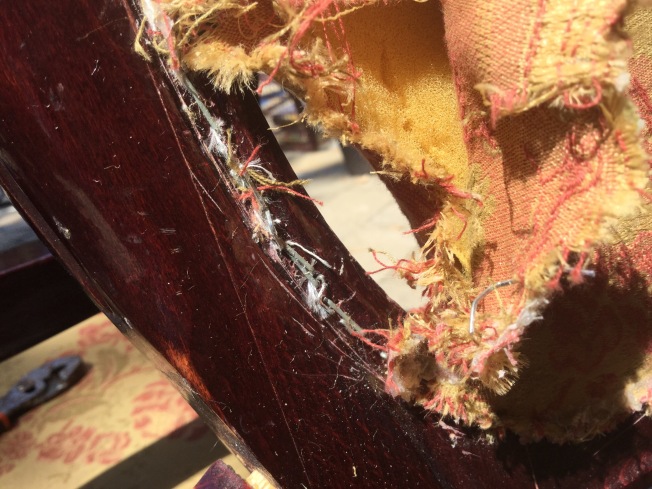 Just to emphasize my point, here are some of the staples from one of the chairs…yup, there were lots! 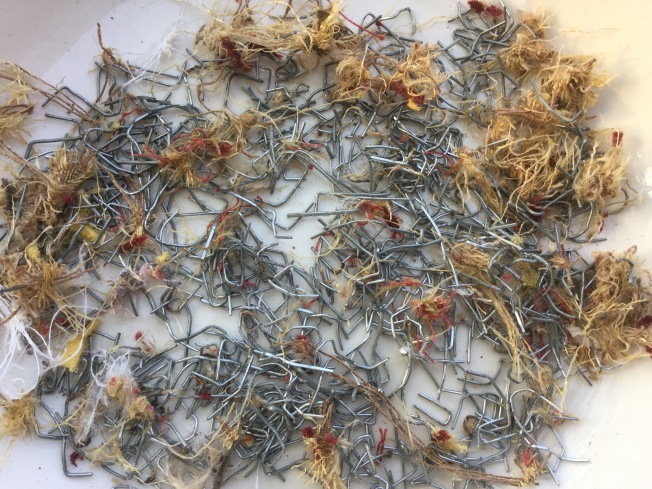 The next step was to sand down the chairs. I have learned that you don’t have to sand the chairs right down to the wood anymore. The paint and primer is so good these days that you just need to sand the top shiny layer of varnish off. I used my mouse sander, which is perfect for jobs like chairs. And, as you can see in the photos, I moved outside in the backyard for the sanding. 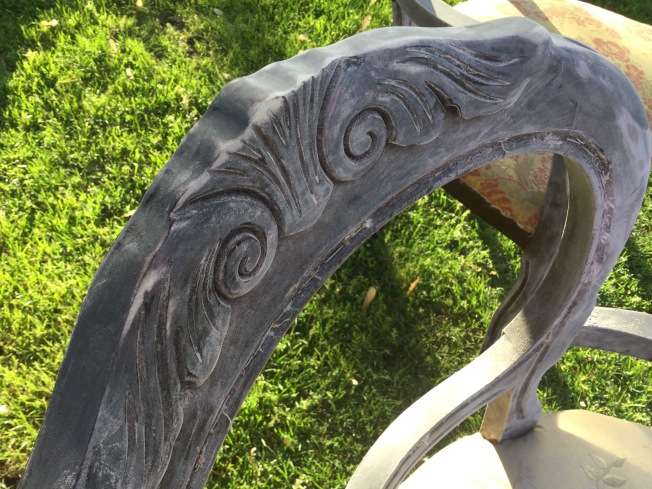 After sanding, I always give the chairs a little wash with a rag to get rid of all the sawdust.

After the chairs had totally dried, I painted them with two thin coats of behr exterior paint and primer.

Then, while waiting for the paint to dry, I cut the fabric for the chair backs and cushions. The best way to do this is to use the old fabric as a pattern, just cut it a couple inches larger.

I should also mention here that I really over estimated the amount of fabric each chair would take. I fought two meters of fabric, but it only took about a meter to cover both chairs. But, as you can see, I picked a black and white fabric with a black trim.

I started with the back of the chair by stapling on layer of the fabric around the perimeter. I also tried to center the design in the middle.

Then, as you can see in the photo below, I added the foam layer in the middle, then stapled th top layer of fabric over top. As you can see, I started by stapling the sides, then I stapled the top and bottom.

Then, as I pulled the fabric tighter, I stapled the rest of the fabric around the perimeter. This part was a little tricky because I realized halfway through that only half of my staples were actually stapled into the wood, the rest went through the fabric. So, I had to pull and restaple a whole bunch of staples….because I hadn’t pulled enough staples already!

The seat cushion is done basically the same way, I put one staple in each side, then added more staples to go around the perimeter.

To cover around the legs, I cut a slit in the fabric… 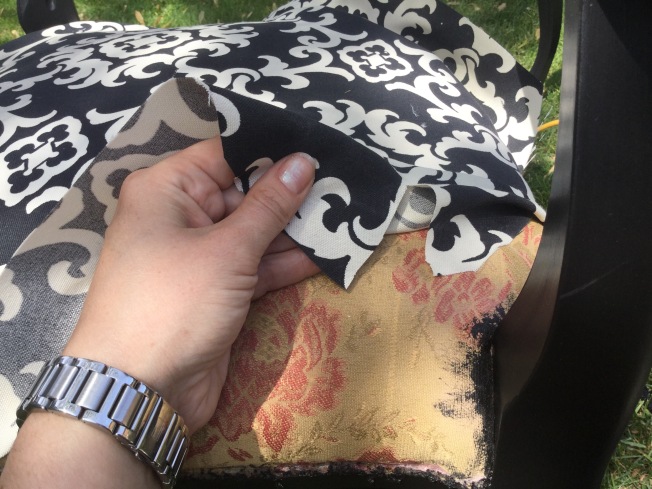 Then, I pulled it tight, and stapled it down. Once all of the fabric was stapled down, I trimmed off the excess fabric. 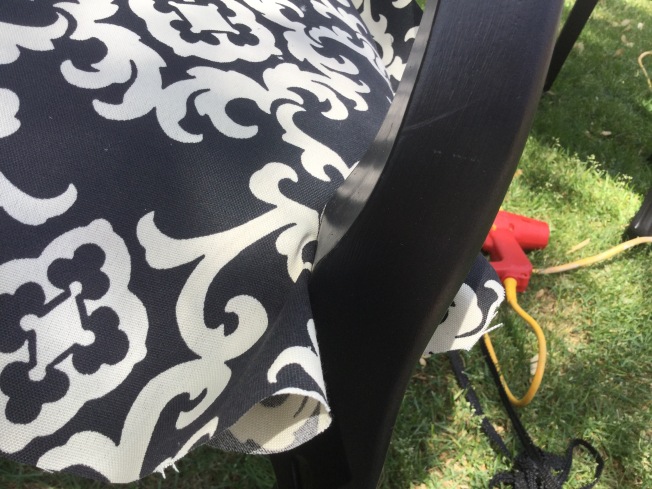 Once the fabric has all been trimmed, it leaves a bit of a rough edge, so that is where the trim comes in.. I used a glue gun to glue around all of the rough edges.

All the way around the back of the chairs, and the seats…

Because the trim is black, I had to be very careful with the glue because if you put too much hot glue, it would not only burn your fingers (which I am totally used to) but it also shows… Which didn’t look so good. So I had to be careful.

Here is my tip of the day…. If you do end up with hot glue in places that you don’t want it, or you have a lot of strings left by the hot glue, use a hairdryer. The hair dryer will soften the glue and you can roll off the extra glue when it is soft.

After all of the excess glue was removed with the hair dryer, I touched up a few places of the paint. But, I was really pleased with the finished product. 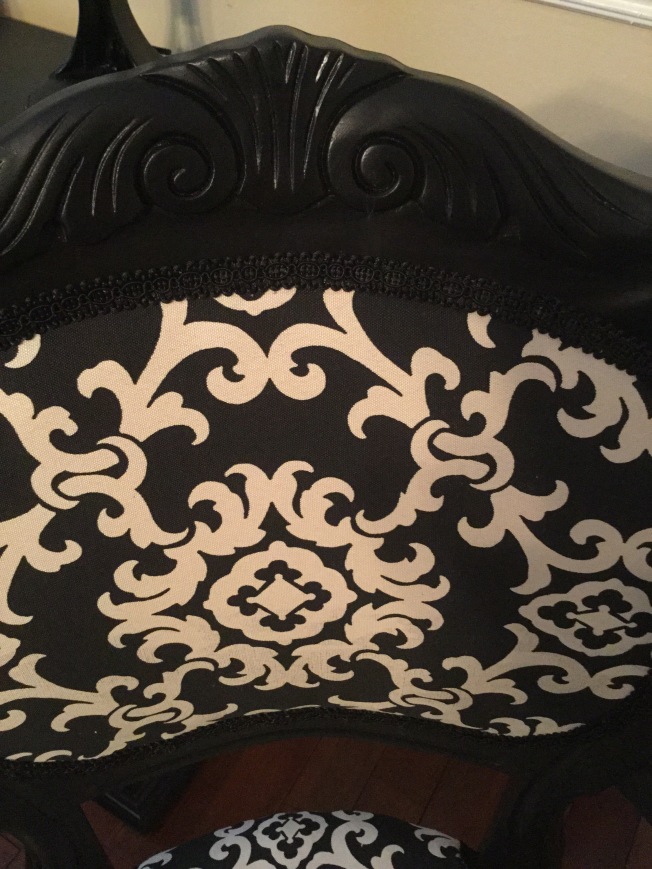 Here are the before and after photos…

Oh, did I already mention that I have already bought 10 more chairs to recover? Yes, I am being serious, I already have started sanding! I ended up selling the above chairs for a price that I was happy with. I decided That I wanted chairs with arms.

I can’t wait to show you the after pictures of these babies! I’m also working on some time saving techniques…I’ll keep you posted! 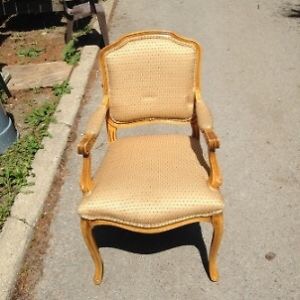 Dylan has been sick for the last week with stomach cramps, and after several trips to the doctors, X-rays, and ultra sounds, we never found out what was causing the pain. But, the good news is that the pain has slowly gone away on its own and he is feeling much better. What we did learn, is that now that he has turned 12, he should now be taking adult Tylenol, and Advil. Sounds great, but the issue was that all children’s medications are in liquid form or chewable. He has never actually needed to swallow a pill before.

We went through the same thig a couple months ago after Sam had to take anibiotics in pill form, and let’s just say there was a bit of a learning curve. So, I thought I would share how we did it.

We started with some tic tacs, rockets candy, and some apple sauce, and apple juice. We started with candy because we learned the hard way with Samantha that learning with real pills isn’t as easy. The pills taste horrible, and much of the pills end up being wasted. The kids were also far more open to swallowing candy! Whatever works, right? 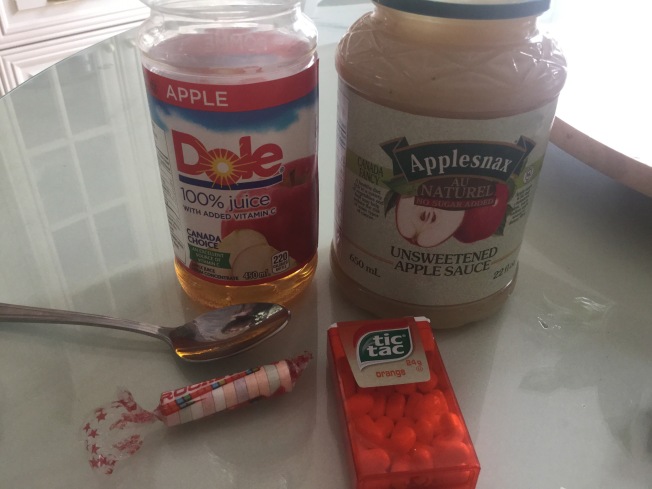 We started by cutting the Rockets candy into smaller pieces. The Rockets worked well because they can easily break into pieces.

We started by placing a small piece of candy at a time into a spoonful of apple sauce. The trick is to have them move the candy to the back of their tongue, then swallow. Then wash it down with a gulp of juice.

We tried a few times, until he felt good about it, then we progressed to a whole tic tac.

Once we had that mastered, we tried a real pill. It took about ten minutes, and he was good to go!

The apple sauce worked really well. Yogurt or pudding would also do the trick. It kept the pill or candy in place and made it much easier to swallow. Our next step is to progress to getting rid of the apple sauce and just swallowing the pills with juice or water.

Anyone else have any tricks that work with kids?