This project is a few years old, but I have been working on a special project with a similar idea for this weekend, (I can’t tell you about it yet…I will post about it next week) so I dug this photo out, and I will share how I did it… I love this project!
Sorry I don’t have pictures of this work in progress, but it was actually pretty simple to do…As i said, will post photos of my new project next week, that will help explain the steps. 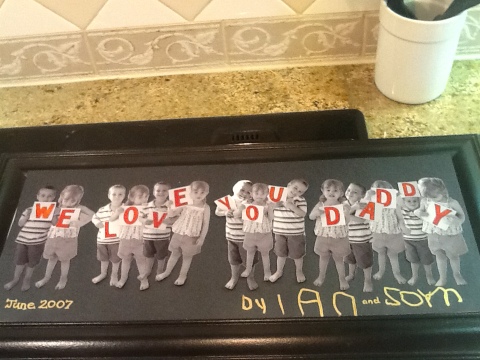 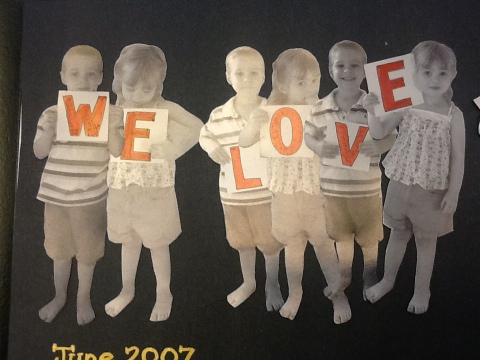 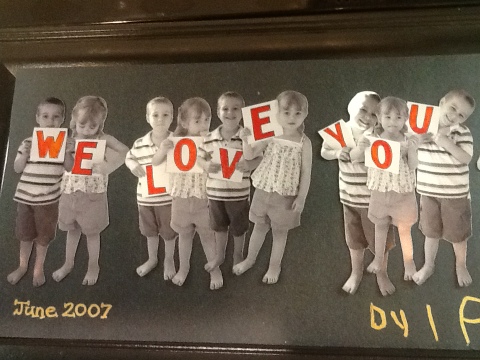 Basically, once i had decided what to say or spell, I drew a block letter outline of each letter on a square of card stock. You could easily type out letters and print them out too.
Then I took pictures of the kids, alternating the letters. I tried to keep the distance away from them consistent, but it wasn’t an exact science! I don’t know if you can see or not, but I had to bribe Sam with cookies, to stay long enough for a photo, and I vividly remember that we needed to take frequent breaks. It really helped to plan this out ahead of time, and decide who was holding what letter before we started taking the pictures.
After all the photos were taken, I took the pictures to Walmart, and had them developed in black and white. Then I carefully cut around each photo. I coloured in the letters on each photo using a red sharpie, because I wanted the letters to stand out.
Btw, i know you could also do almost the same thing in photoshop, but I somehow still like doing it the old school way. There is something I still really enjoy about cutting and pasting… Sitting in front of the computer just isn’t the same…but, hey, whatever works for you!
Anyways, once I cut out and coloured all of the photos, then I played around with arranging all the photos so that the words and kids were easy to see.
Then I glued the pictures down and framed it.
I ended up loving the idea so much that I made a frame for my mom… 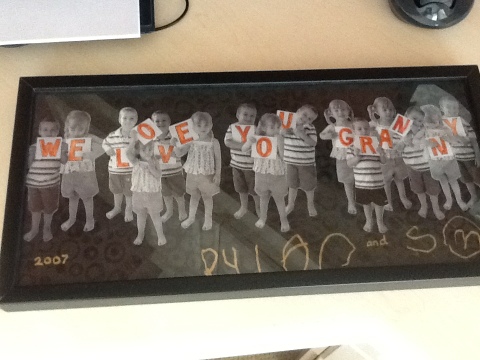 And, I used the same idea for our Christmas cards…

Here is a better picture that is cropped…

I hope I have given you enough time to make your own for mothers or fathers day!