I used to make these paper beads as a kid, so i thought i would try them out again as another project for my encyclopedias.
To make the beads, you need mod podge glue or white glue, paper, and a bbq skewer, and scissors or a knife.

First cut the paper into strips. I decided to cut the all of the strips out of black and white text. But, cutting them out of coloured paper and text is really pretty too. I used a ruler and exacto knife, but cutting with a pair of scissors is fine too, just try to keep your lines straight. You might even want to draw where you are going to cut with a ruler. 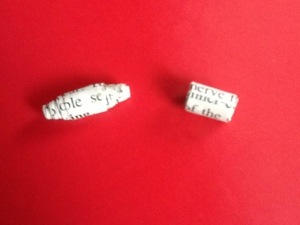 Here is my daughter trying out making some beads…

You can use a paintbrush to spread the glue, but i prefer to dip my finger in the glue instead of using a brush because I can control the glue better. I also don’t mind getting sticky and glue all over my hands. (funny, my daughter doesn’t seem to mind either!)
Anyways, spread the glue on the entire length of the paper strip (don’t forget to glue on the wrong side of the paper), but leave the last centimeter with no glue because you don’t want it sticking to the skewer that you will be rolling it around. Then, start by wrapping the unglued end of the strip around the skewer

And continue rolling until the whole paper is wrapped. I like to stop just before the end and add a touch more glue to hold the end so it doesn’t unroll.

Then slide it off the skewer, and start again…

At this point they are cute, but wait until you see them as part of a necklace and earrings!